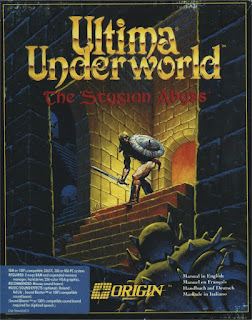 Just a quick note, I've already written something of a retrospective of the Ultima series, including the Underworld titles. You can check out those musings from here.

It's almost impossible to comprehend the fact, that Ultima Underworld: Stygian Abyss came out in 1992. To put it into a bigger perspective, Wolfenstein 3D came out the same year and Doom was over a year away. The first proper 3D FPS came out in 1996. Ultima Underworld was ahead of all of those games, even Quake to an extent. As for RPGs, the first Elder Scrolls game, Arena, came out in 1994 and was far from the interactivity of Underworld, as was Daggerfall, which greatly improved upon Arena in 1996.  Deus Ex came out in 2000.

I guess I should mention another immersive sim, System Shock (1994) as well, but there, the friendly NPCs were removed from the equation. Yes, it was done by the same developers, but I don't quite know if I'd place it in quite the same genre, Underworld is more of an RPG after all whereas System Shock leans more towards being a shooter Your mileage may vary and in truth, immersive sim genre does have its fair share of more FPS oriented titles. 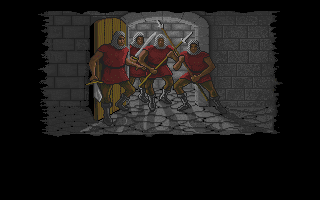 3D had been done in-game before Ultima Underworld, just not at the same level. Not only does it provide game environments with fully textured walls, floors and ceilings, but you can also move freely in that world. You can also jump over the obstacles, swim, pick up objects and throw them around, leaving them where they land. And there's even rudimentary physics at play, with the objects bouncing off the walls they hit. If your skills allow it, you can find many shortcuts around the more obvious paths.

Furthermore, unlike in Wolfenstein and Doom, for example, each of the 8 levels of the Stygian Abyss has all kinds of variations in the level structure, with slanted floors and places, you need to jump or use magic to fly to. It's also possible to walk under some areas of the level structures, a feat, that even Doom didn't manage to do. It took till Quake had a better 3D engine, but Quake lacked all other gameplay elements in favour of fast paces shooting. Originally, Quake was meant to have RPG elements, but those were ditched in favour of fast-paced action.

The creatures and many of the items you see are done as 2D sprites, but given the time the game was made, pulling off decent-looking 3D creatures would have been very hard. The later Playstation release of Underworld did add 3D creatures as well as having a larger game screen, but it also came out around much later in 1997. 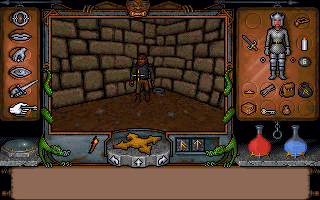 The denizens of the Stygian Abyss aren't there only for you to kill, you can talk with people, even with some monsters. You can barter with them, all creatures having their own inventory;  some are there to aid you in your quest, others just to give some additional flavour.

So, simply from the technical point of view, even with some of the expected jankiness from such an early 3D title, Ultima Underworld was light years ahead of everything else in the market for the PCs of the era. It's a game filled with technical ambition and somehow, Blue Sky Productions, which later turned into Looking Glass of Thief fame, managed to pull it off with such flying colours. It's nothing short of mind-boggling.

Sure, there are some things that could be better. Like jumping is a bit of an ordeal, requiring precision and a lot of trial and error, as it's really hard to control how far Avatar jumps. And obviously, given the age of the game, moving isn't as fluent as in modern games or even in Wolfenstein 3D, but you soon get the hang of it. 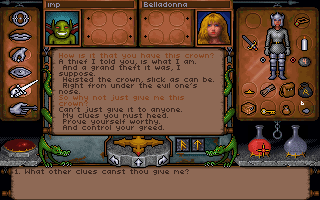 What comes to moving, there's actually a fan-made patch that gives a solid free mouse mode as well as the possibility to use WASD keys on moving. It really does make the game far more playable. Then there's the Ultima Underworld Unity project, which aims to do the same to Underworld that has already been done for Daggerfall. The Unity version should be more or less fully playable, but by no means fully feature complete. But, what I've tried of it, it does make the game far more fluent to play as well as it improves on the 3D aspects and allows playing with a bigger view.

The game itself is a technological marvel, but how's the story then, you might ask. Well, the story isn't anything extremely special, more of an excuse for the Avatar to end up in the Stygian dungeons. A ghostly image of an old mage appears in Avatar's dreams. It's Garamon, a brother of another wizard Tyball, who pleads with Avatar to come and help Britannia once again. He and Tyball have accidentally summoned a demon, who has now killed Garamon and Tyball, wanting to kill the demon sealed in the room with the altar of Virtue, is planning on sacrificing the daughter of baron Almaric to do so, as he lacks the virtue to actually enter the room.

As Avatar enter Britannia, he ends up witnessing the kidnapping of Arial just before Almaric's men burst into the room. The baron suspects Avatar of the kidnapping and sends him to the Abyss. If he manages to rescue his daughter, all doubt is dropped. This suits Avatar just fine, as the Abyss was where he was going in the first place, though now he's there without any equipment. 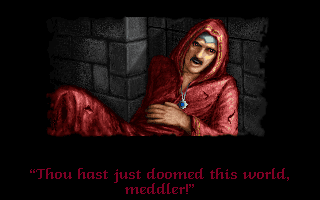 So, there it begins, Avatars, either a male or a female depending on your preferences, begins a long descent to the Abyss, where the demon, Slasher of Veils awaits. Though, the mage Tyball needs to be taken care of as well, as he still has Aria as his prisoner.

As I said, the story isn't really anything special, just a solid reason why the game takes place in this particular dungeon. And it also provides a good enough reason why the game isn't set in a similar open-world setting as the main Ultima games are.

All it really boils down to is, that Avatar needs to find 8 magical symbols and a 3 part key. The key opens up the virtue room, where Slasher of Veils is. There, the symbols are chucked into a volcano (which the room basically is), and their magical power causes an eruption, that takes the demon back to the void, Avatar in tow. 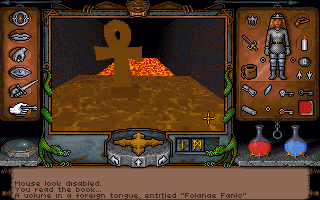 Suppose you were expecting a climatic end battle. In that case, you might be disappointed, as, in the end, all the Avatar has to do is to run along a green brick road to a port, that whisks the embodiment of the virtues to the ocean neart the Stygian Abyss, from where the baron fishes to the saviour of Britannia to his ship, gives thanks and so, with something of an anti-climatic note, the game ends.

The journey is definitely more interesting than the ending, but the setting is strong enough to make it all worthwhile. And, even as it is, Ultima Underworld is a surprisingly playable game, if you are willing to adjust a bit. And if you aren't willing to play the game as it is, you can always mod it a bit to make it more playable for modern gamers.

Ultima Underworld definitely is the kind of game that could benefit greatly from a remake. Take the gameplay, add modern controls, and improve the graphics. Basically, do what the Underworld Unity is aiming to do and the game is good for decades to come. 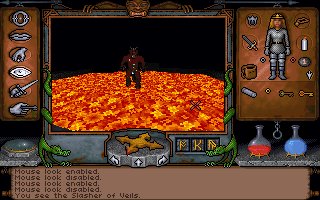 As I said, the game does baffle the mind a bit. It was so ahead of its time, that its existence feels something of an anomaly, especially given how long it took for the rest of the industry to catch up. And in some ways, they still are trying to catch up with the legacy Ultima Underworld created.

The underworld has cast a long shadow. The genre it's most often cited for belonging to, immersive sims, does get new entries from time to time. Bioshock and Dishonored are two of the well-known modern series that owe a considerable debt to the game Blue Sky developed in the advent of 3D early 3D games. But still, none of these new series has managed to quite catch the same lightning in the bottle, often veering more towards being shooters with some pretence of player choice, but with very little actual effect.

If you want to play Ultima Underworld: The Stygian Abyss, it's sold in GOG. The package contains both games and I really do recommend them. 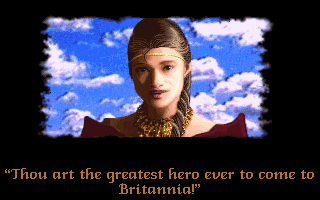