Alfonso Azpiri is an artist I've presented here before. The previous entry I had from him was Camelot Warriors. Azpiri was a Spanish artist, who did stuff for Heavy Metal-magazine among other things. All the following boxes are his handiwork. 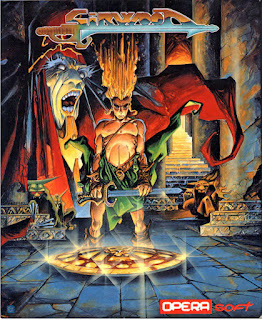 Evildoers of the world have been at it again in this side-scrolling action game. This time around, Arn, a mere shepherd, has to go after a golden shield stolen from his village Nargoot by Amargol, who probably plans on doing all kinds of nasty stuff with it.

I can only assume, the shirtless stud on the box is Arn, so obviously shepherding is good for your muscle growth. It's probably pretty dull, so he must have had a lot of time to concentrate bulking up. And the blind bugger in the red robe is in all likelihood Amargol. Seem nasty enough to steel golden shields from unsuspecting members of the proletariat.

Jokes aside, this is a pretty great box cover. I suspect it does place expectations on the game, the game can't quite cash, but I do love the comic book style of Azpiri's art. Lovely stuff. 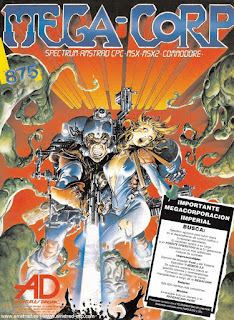 Unlike what you might deduce from the box, Meca-Corp is actually a text adventure game with graphics. With the grumpy sod carrying a lady while shooting some green monsters, I was at first certain it would be one of those ever so popular 1980s sidescrolling shooters. As it is a text adventure, I doubt it even has that much action in it. Mega-Corp is a Spanish only title, as far I can tell, so I haven't played it myself. The screenshots of it I've seen don't look half bad either, despite its DOS version sports the ugliest palette ever devised, CGA.

As Mega-Corp is an adventure game, it has a proper story, which is always a good thing. In the future two entities, the Empire and the Federation, are at odds. Megacorps exist to infuse their tentacles into human life as much as possible. You play as an agent, whose task is to guide planet GEA-3 back into the Empire's fold, as it now has a Federal government.  The story setting sounds actually a bit different than what I expected, especially based on the game box. It's a damn shame I don't understand a word of Spanish, as it actually sounds refreshingly different for a sci-fi game.

Oh well, one can't have everything. 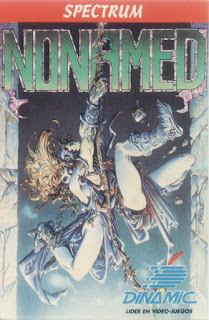 So, the story of this sidescrolling action game is pretty simple: You are a man, wanting to be a knight in the court of King Abdul Honeickam Gargoi. It's not an easy thing to become a knight though, as there are tests. Deadly tests. Those said tests take place in a castle with No Name! So, get in and get out alive and you'll be a knight.

I have no idea if the game is good or not, but the box art does look fantastic. The colours, the dynamic poses, the sense of peril it has. I do wonder if the game can come even close? I have my doubts.

Based on the YouTube videos, Nonamed is a pretty standard sidescroller. You fight enemies, jump on platforms, climb ropes and do all the other stuff you usually do in a game like this. I guess, there might even be some simplistic puzzles here and there. It's another Spanish only title, but as the game itself seems to be more or less text free, you only have to navigate through the start menu if you do want to give it a go without any skills in the language.

A small update, 20th of November, 2020 So, the beta for SpaceVenture did, indeed, get on its way on the 2nd of August. The game was, as I expected, very buggy and was impossible to complete because of the bugs. A couple of versions later, the current version of SpaveVenture can be played through from the beginning to the end. As such, the game still is very buggy and far from being in a condition that it can be released. I've played the game through a couple of times and stumbled upon a few game-breaking bugs that need to be addressed. On that same note, the developers have managed to fix a couple of very nasty bugs that were complete showstoppers in the previous versions.  It is very likely the game won't be released this year, considering all the bugs. But it does have that Space Quest-feel and if the devs ever get it properly fixed, it should provide fun enough of a game. Maybe be not a fantastic game, but good for what it is. End of update The last time I took a bigger gl 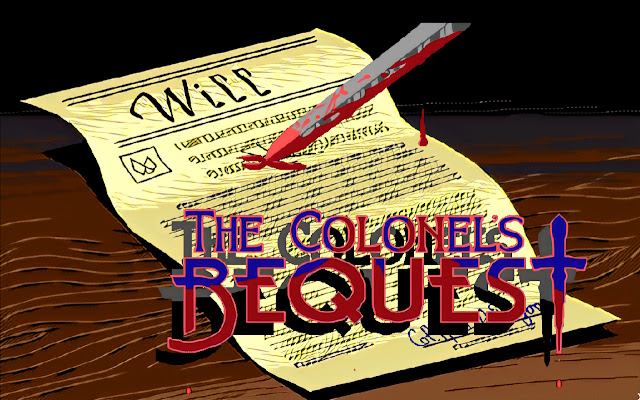 For a while, something pretty amazing has been cooking with ScummVM. An amazing person called Myles Johnston has been implementing features to ScummVM that allow the use of high-resolution graphics in old Sierra games. These graphics can be either newly drawn or upscaled with AI tools like ESRGAN, but the end result is the same: by using ScummVMX, you can play the old Sierra games with graphics 4x higher resolution than they were originally made in. Of course, this is still in development and doesn't always quite work, but the results are already amazing. For example, here's a try I did with the Dagger of Amon Ra: But, this is not about the Dagger of Amon Ra, the sequel to Colonel's Bequest, as ScummVMX also works on older Sierra games as well. Here is a small mod I've been tinkering for the first Laura Bow-title. Now, I'm not claiming these ESRGAN upscaled images look better than the original graphics. The original is one of the best looking EGA-Sierra titles afte

Mixed Up Fairy Tales (1991), designed and directed by Lori Ann Cole, developed and published by Sierra On-line I guess you could consider Mixed Up Fairy Tales as a continuation to the earlier Roberta Williams Mother Goose game, as the idea is more or less the same in this Lori Ann Cole, better known for Quest for Glory games, helmed title. Like in the Mother Goose game, you get to choose a gender and ethnicity of the kid you want to represent you and are whisked away to a land of fairy tales, where a nasty ball-shaped gremlin has messed up the fairy tales. The keeper of the fairy tales, Bookwyrm, tasks you to help the tales to get to their respective endings so that children everywhere can keep enjoying them. Mother Goose was a game aimed more to kids under 5-years old, so it was in gameplay and puzzles, very easy game to play and get into. You had to find story-specific items and carry them to the right fairy tale people to see the rhyme unfold.  Mixed Up Fairy Tales is a bit mor