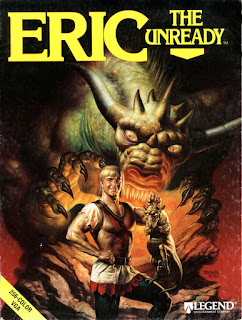 Eric the Unready (1993) written and designed by Bob Bates, developed and published by Legend Entertainment Company

In the early 90s, when adventure games were still in vogue there still was room for text adventures. The most notable company in the genre was Legend Entertainment, which was known for its humorous approach on the subject matter, despite the comedy, nor even text games in the latter half of the decade were not their only vehicles.

The style they had chosen were graphics text adventures, meaning the games had some graphics, but most of it was described in the text and the amount of animation was rather minimal. Their games did have mouse interface as well, which allows the player to choose the verbs, adjectives and subjects from a menu, but personally, I find it faster to just type in the command phrases, which can be far more complex than what Sierra games had in the 80s. Perhaps the nicest addition to the genre of text adventures is the inclusion of an in-game map, which makes navigation much easier, especially in complex locations.

Later on, Legend changed their engine to be fully graphical and mouse-driven, which allowed them to create 1st person point and click games. This style of engine was already used in Legends Companions of Xanth, released in the same year as Eric The Unready, and in an adventure/RPG hybrid Shannara. 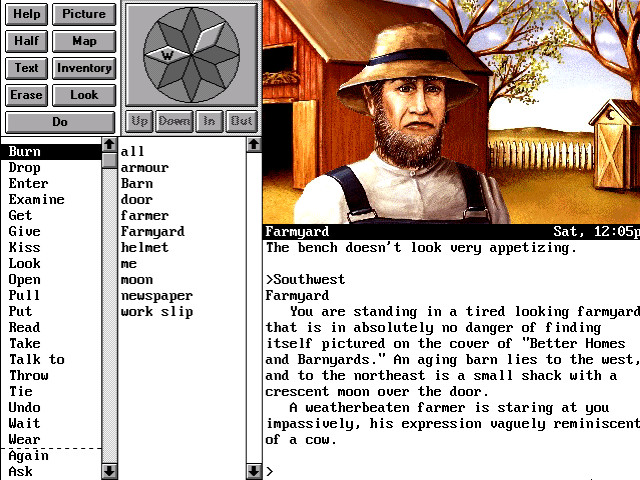 But enough of history, this is about the comedic adventures of an unfortunate knight, Eric the Unready, who is a genuine hard days knight.

After messing up several times, Eric is put on the roster of doing missions no self-respecting knight would want to do. His first mission in this new roster is to take care of a farmers daughter who was turned into a pig by a passing witch. And this is the point where the game begins.

Removing a curse should be simple enough of a task. All Eric has to do is to kiss the farmers daughter in distress to turn her back to human. But rarely things go as smoothly. The pig, not wanting to be kissed runs off and hides inside the outhouse. You know, down in the hole. And down in the same hole, Eric has to go as well. 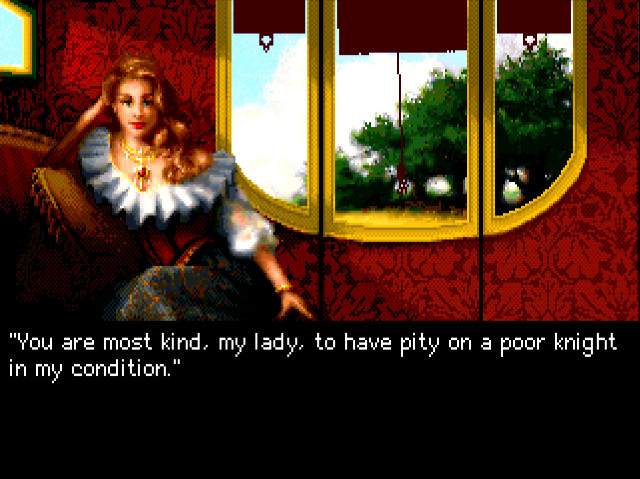 After these antics, Eric returns back to the barracks, driven there by the princess Lorealle, who seems to have a soft spot on the hapless knight. A short, smelly carriage ride later, Eric slumps to sleep only to wake up with his armour rusted, immobilizing him to bed while a page is calling all knights to the assembly hall.

A non-puzzle later, Eric learns, among other knights, that Lorealle has been kidnapped and by some mystery, it is Eric, who has been chosen to rescue her. As you might guess, something rotten is afoot in the kingdom, but that matters not, as Eric just might be the right man on the job after all. It's not like he is the only less than stellar adventure hero to save the day.

The local laid back wizard tells Eric what is needed to get in the witches castle responsible for the kidnapping. He needs the Pitchfork of Damocles, the Crescent Wrench of Damocles, the Raw Steak of Eternity, the Crowbar of Apocalypse and the Bolt Cutters of Doom. All which are required to solve a series of language-based pun puzzles in the end. 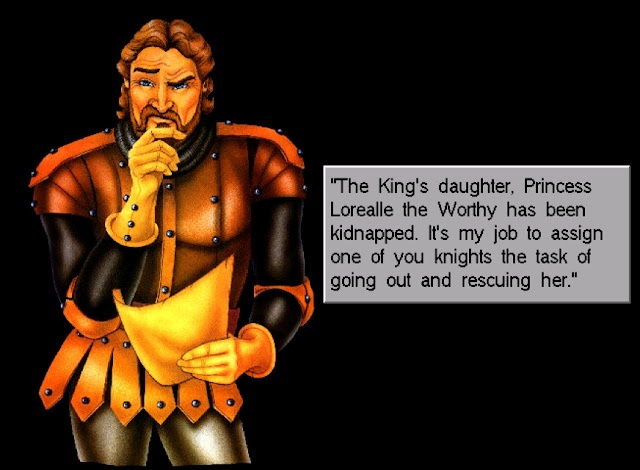 As Eric the Unready is a comedy game, it shouldn't take long to figure out if it is something you'd want to endure to the end. While I found it amusing enough, it's hardly high brow comedy, nor laugh out loud funny.  In short, if you don't like the style of comedy presented in the intro or in the first puzzles, it is very unlikely you'll like the rest of the game, especially because some of the puzzles are groan-worthy word puns.

The story takes Eric through several different locations, from the underworld dwelling of the dwarves to overcloud habitation of the gods. From each of these places, he finds one of the items he needs while stumbling on references ranging from other games, like Monkey Island, to movies and TV-series like Star Trek.

The puzzles range from rather simple to annoying, mostly as there are quite a few word pun puzzles, so if you are one of the people who agonised over the infamous monkey wrench puzzle in Monkey Island 2, this might not be the game for you. Though there always is a logic behind all of the puzzles, often even the kind of which makes you smack your forehead if you checked the solution from a walkthrough. 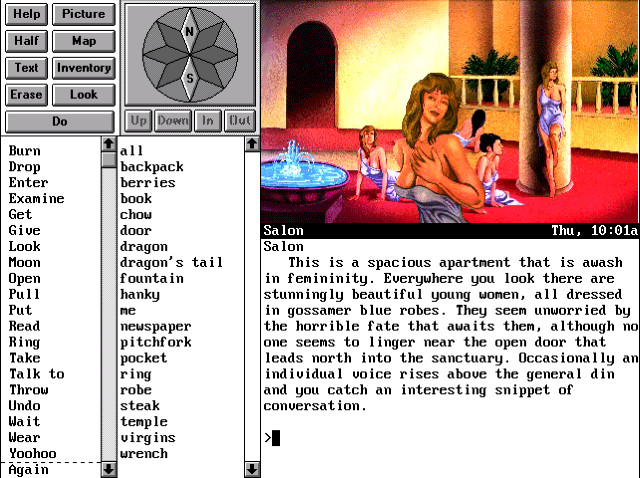 The worst puzzle of the game requires you to call for a birthday cake. Despite there were several calls such and such a number for something jokes, I never did connect to me, that you can actually call in the game, even when there are no phones around. All you need to do is to type in call and the number. If not for this, I probably could have chosen some other puzzle, perhaps a word pun.

Like I stated earlier, the parser system Legend games used is pretty solid. It allows complex commands, like pick up the newspaper a read it, but it still doesn't quite remove the need to know what actual verb the developers were thinking in some places. On the other hand, you can give a command, like unlock the door, to which the game can ask a clarification, that can be answered, like the red key. So while the parser system is much smarter than what Sierra ever did, for an example, it still does leave some room for improvement in contrast on how much simpler icon and mouse driven interface is.

In any case, I liked Eric the Unready enough for a single playthrough. It does get a bit worse towards the end, but it was amusing enough to make up the annoyances I had with the game. It isn't, however, memorable enough to bother more than once. And considering the game ends with a notion that there might be more adventures for Eric, which never manifested, I'd guess the main bulk of the players, who bothered with it, felt more or less the same. 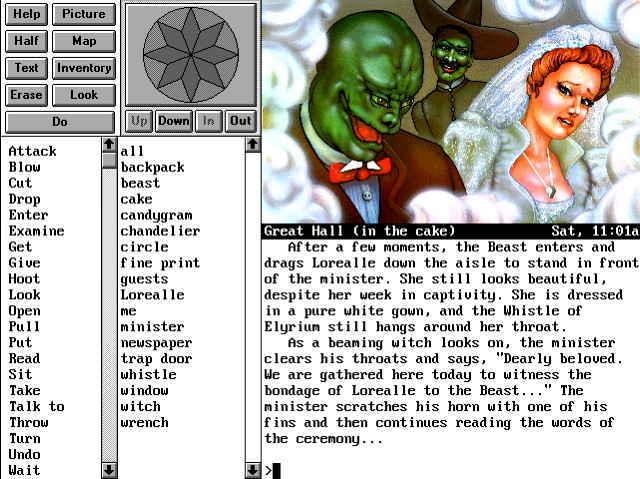