Get good with Willy 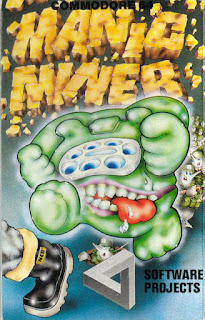 Once in a while, you hear, or read more like it, someone saying, how a game so and so is difficult and then someone retorts, that those complaining should just "get good" at the games. I do wonder how many of those snarkily telling others to "get good" would be able to play through either Manic Miner or Jet Set Willy?

Manic Miner is the first game in the series of games starring miner Willy. In his first outing, the brave adventurer, as the cover of the cassette box tells us, Willy is exploring an abandoned mine shaft, from where he finds evidence of lost civilization. The civilization is no more, but their advanced robots have been at it through the centuries, digging up valuable minerals and metals.

This is my day, Willy thinks and begins his looting of the 20 or so levels of the mines. With only his ability to walk and jump, he now must face the perils left behind a civilization long dead. But it's not only the machinery left behind that is the problem, but it's also his air supply, as each room has an only a limited amount of the precious stuff.

While Manic Miner might seem like a platform game at first glance, it soon becomes obvious, that it's actually a puzzle game masquerading a platform game. The further you go, and the more difficult the game becomes the clearer it is, that in order to advance, you don't only have to be good at pixel precise jumping, you have figure out what is the best way to clear each room of the treasure before you can head to the exit.

What makes things even more difficult is, that some levels have special features of which you have to be aware of.  At times, one piece of treasure can be in a place from where you can't get out from or you die if you take it before it is a final object. Or there might be something deadly moving in the room, which will then barricade the exit and if you are too far away, you don't have enough time to get to it first.

Manic Miner isn't a long game, but it takes time to master it to a degree that you can actually finish it. It really is a game, that expects you to be good. It expects you to genuinely figure out the limits of what you can do. And I have never finished it for real. I have played it a lot, but I have never finished it without save states from an emulator. 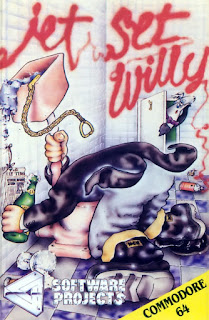 Jet Set Willy continues from where Manic Miner left Willy. He is now rich beyond his dreams, an owner of a huge mansion and a yacht, in which he has lavish parties.  People ebb and flow to his house, wanting to see the adventurer and to take part in his new found wealth.

After his most recent party, Willy wants nothing more than to crash into his bed, but unluckily for him, his new housekeeper has decided to put her foot down, stating that his employer has no business in bed unless he cleans up the mess left behind his guests.

The house is much bigger than the inebriated Willy could have ever imagined, he hasn't even gone through all the rooms himself, but now he has more than ample time to do so while looking for the trash and dishes scattered all around the house.

Willy has to gather over 80 items in order to appease his housekeeper. Again, his pixel perfect and correctly timed jumping abilities are needed. Monsters, traps, drunken nightmares and forgotten scientific experiments left behind by the former owner of the house stand in the way of Willy, but with a stiff upper lip, he stumbles to his quest.

If Manic Miner is challenging, you could describe Jet Set Willy as extremely difficult. You will die numerous times before you master the game. You will restart it again time after time. This time around, it isn't simply enough to be aware of how Willy moves, it would be smart to actually write down room by room instruction on how to tackle things.

An extra set of difficulty comes from the fact, that many versions of the game are actually bugged, preventing progression beyond a certain point. So, if you are playing the game, happily collecting items, you might end up in a dead end not related to your skills. But even with the fixed version, most people will never finish the game as it takes dedication and there are no save slots if you are not playing with an emulator.

When people talk of old school difficulty, this is something they might think they have in mind, but I don't believe this kind of gaming is what they actually would want. They want difficulty filtered so, that it just looks and feels like it is old school, but really isn't in a way, that it doesn't waste too much of their time in a way games that require you actually to figure out the precise amount of pixels you need to have between you and the enemy you are trying to avoid.

While I am certain somewhere out there is a person, who can play both Jet Set Willy and Manic Miner through on one sitting without dying once, most people just are not that person. Those kinds of people are a rarity, a genuine niche among niches. Some of them might even be pretty vocal in search of the hardcore game of their dreams, but if they are smart, they also know most people are not like them.

But that's difficulty for you. It doesn't really matter how easy or hard something is, there will always be someone somewhere claiming it's either too easy or too hard. And that's all fine. There is room for games with varying difficulty and not everything has to be accessible for everyone.

There would be other things to discuss as well, as far Jet Set Willy goes at least, as there is a peculiar religious undertone with the game as a whole.  One of the rooms is a church chapel with a devils head, some of the enemies are monks, there is a priest hole with a devil in it and then there is the portal to hell itself.

It would be easy to overlook that imagery, and I suspect a good many people do, but for me at least, it does come out as a hidden subtext of sorts. But if that subtext is to criticize or parody, I wouldn't be able to say. I just thought it would be an interesting thing to throw out there for you to ponder.
action adventure amstrad game Games puzzle retro retrogame vintage