A true competitor for the stupidest movies ever: The Wandering Earth (2019) 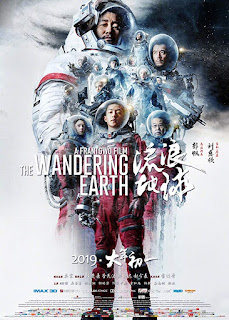 Without any doubt, The Wandering Earth is one of the stupidest disaster movies I've seen in ages. It doesn't only ask you to turn off your brains, it asks you to lobotomize yourself in order not to die in extreme eye-rolling every piece of evolving storyline in the movie presents.

The Sun is about to engulf the Earth. Within a hundred years, the Sun will have expanded enough for the Earth to die, so in order for the human race to survive, the nations get together and execute a plan they call the Wandering Earth. What it means is, that they build thousands of jet engines to the surface of our fair home in order to thrust the Earth on its way towards a new star thousands of years away. The remaining people and the future generations will spend this long voyages mostly in underground cities.

But, oh noes, something goes terribly wrong. When the Earth arrives at Jupiter, where it was supposed to slingshot away from its old home, the engines began to shut down because of the gravitation spikes of the gas giant. Something has to be done, quickly, before all is too late. I guess it goes without saying, that things are not so hot down on Earth.

In space, a space station meant to monitor the progress of the Earth is in its own turmoil as well. The astronauts stationed there have learned, that this eventuality has been taken into consideration and that is the Earth collapses with the Jupiter, it's the space-station mission to continue on with all the known DNA.

All kinds of shenanigans, which are mostly filled with soap opera tier drama, later, the idea strikes: in order to save the Earth, one has to just ignite Jupiter, so that the blast can push it on the right direction. I guess I now went and spoiled the movie for you. Tough.

I have nothing against idiotic ideas. In the right kind of a movie an idea of the Earth with rockets strapped to it could be entertaining as hell, but in here, not so much, mostly thanks to the heavy-handed script, that is taking itself far too seriously.  Frant Gwo is trying far too hard to make something as inherently silly as the premises of the movie is a serious movie, with deep dramatic moments.

If you want my advice, if you have intentions of seeing the Wandering Earth, call some friends, get a decent buzz on and just spend two hours making fun of the movie. Or better yet, wait for the Riff Trax or Mystery Science Theater 3000 to do that for you.