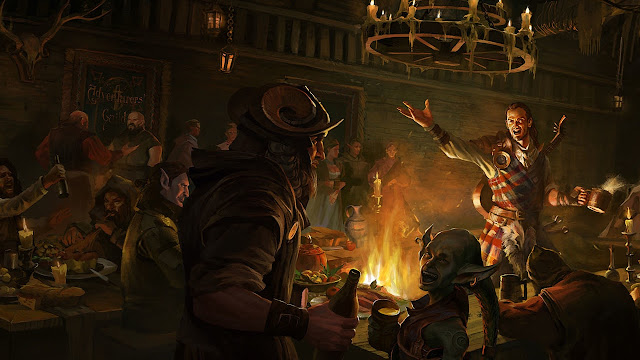 This is the look on my first 10 or so hours with the Bard's Tale IV. Most of the 10 hours I've spent with the game thus far have been in the new and old Skara Brae, but after finally completing the Kylearan's tower, I've managed to get a scenery change and gotten out of the city. And for what it's worth, that 10 hours hasn't been dull.

Melody, your bard if you so choose, is at Skara Brae, watching a hanging of heretics and adventurers. It's not a good time to be someone like her in a world ruled by a pious clerky, whose bidding is done by loyal paladins. Rabbie, an elderly bard takes Melody to the local adventurers guild, which is the point in time you can make yourself a brand new character if you want. I decided to keep Melody and so her and Rabbie escape the deep underground Skara Brae after the guild hall is burnt to the ground by the paladins.

If you've played the old Bard's Tale games, Barrows Deep might be a sort of a shock, as it is very, very different from what the old games from the 1980's were. In the old games you'd have created your party already, but here, you go through a tutorial section, which ends in creating the first character, but that isn't mandatory at all. 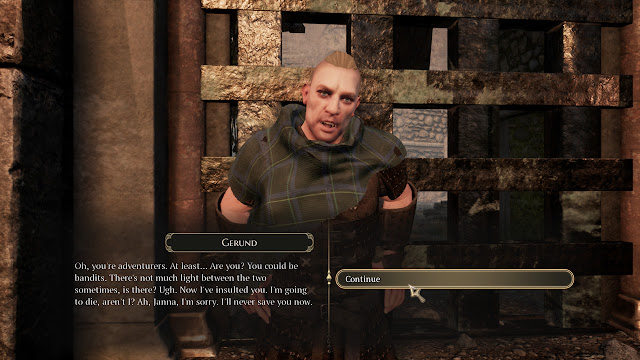 The second shock might come from that there are no random encounters. When exploring the dungeons and locations, you have some sort of a grasp on how many enemies you might be facing. At times, new enemies come and replace the ones you've killed, but most of the time you can have the satisfaction of clearing up the place.

But the Skara Brae deep, the city that was buried under the rubble and a top of the new Skara Brae is located. As you'd imagine, the place is a derelict ruin, full of monsters but refugees as well, who have found safe haven beneath the feet of their oppressors. Magical folk, the elder races, heretics and adventurers all exist there in peace. They even have a guild hall there. And if you remember anything about the map of the city from the first Bard's Tale, you might even recognize some of the locations.

Here's the third shock: Barrows Deep has far more story in it than the old games combined. Instead of just handful of NPC's you can talk to, there are dozens of people, quest givers and merchants you can talk with.

So, Rabbie and Melody head on to the new old Adventurer's Guild, from where Melody is tasked to look for a couple of friends taking care of business. And while she's at it, she could give them a helping hand. This takes her back to the surface, where she needs to solve some easy puzzles while looking for her new companions. This all is, I assure you, just warming up. 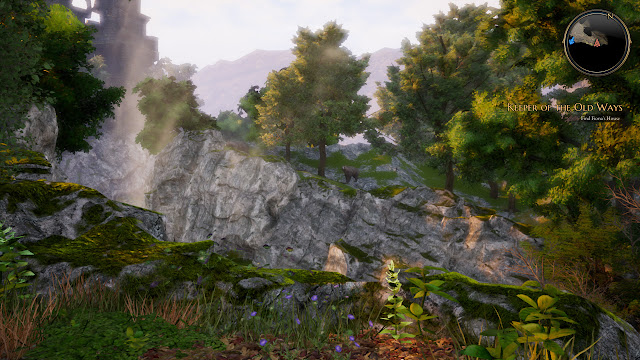 As a side note, after you get to the Old Adventurer's Guild, you can create a party for yourself, as soon as you dig up mercenary tokens. Each new recruit costs one token, so the pool of characters you have depends on how many coins you have. So if you don't want to use the companions you meet on your journey, you can always build a new team. It's not the greatest system, especially for those who want to play the game fully with a customized team, but it is, at least, something. A better option could have been something like what Larian did with Divinity Original Sin 2, where they allowed starting the game with either a custom or ready-made character.

With a full party, Melody heads back underground, where Rabbie tasks her to talk with a local sorcerer, who lives in Kylearan's tower nearby. A tower, that is one, continuous puzzle, where you need to solve one after another if you want to proceed to the end. Sure, there's combat as well, but the main bulk of the tower is on exploration and puzzle solving. I was liking the game before I got there, but during my trip through the tower, I really, really started to enjoy myself.

And there's the fourth shock: Barrows Deep is much more focused on the puzzles than the previous games were. Even combat feels more like a puzzle with its chess-like setup. In the combat, the characters have shared pool of action points you can use to do things like attacking or meditating for spell points. Some actions, like casting a spell don't take action points but spell points instead. The bard can drink some booze to get more points to sing the magical songs. The flow of the combat is turn-based, one side does their things first, then the other follows if there's anyone left alive. 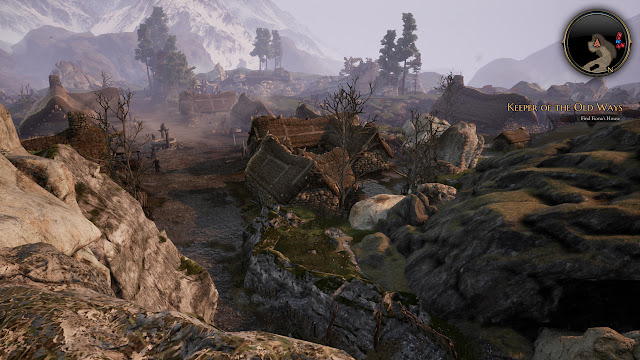 I wasn't sold on the combat when I saw pictures and video of it, but in practice, it is fun and even challenging, if you tackle enemies that are either close to your party's level or above it. The combat system as a whole probably comes as a fifth shock, as it is as a whole even bigger departure from what the original games were like, especially on how the skills work and how much fewer spells and the like you have. I don't mind it though, as when I was playing the original Remaster, I found that you really need to use only a handful of spells in any case.

Barrows Deep has divided its characters into four archetypes; Bards, fighters, mages and rogues. On level up, the characters gain an ability point, which can be spent on one of the different skills. The final goal is to grow the character into class mastery, which gives additional bonuses. Each archetype has several paths to choose from, so as an example bard can become a troubadour or rabble-rouser, which both give different skills and bonuses. Additional character bonuses are gained through weapons and armours, which encourages into experimentation with the found and bought items. As you'd think, the character progression is yet another shock the players of the original game will be experiencing. There's a review board at least, that gives its okay for further development, so not all is thrown away from the past.

Sadly enough, the Bard's Tale IV was released in quite a buggy state, but as I'm writing this, the first big patch has already landed and it did fix at least the most noticeable bugs I encountered myself as well as improved the performance a bit. inXile has more patches in the pipeline and the next one should be landing this week or so. 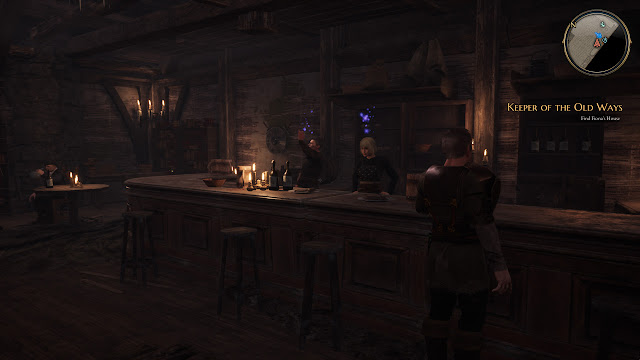 Graphically the game is a tad mixed bag as well, as at times it does look quite nice, but some stuff it has suffers from low-resolution textures and low poly modelling. And the animation system leaves a lot of room for improvements, especially what comes to facial animations. There's also some odd blurriness in the graphics which doesn't seem to want to go away no matter how much I fiddle with the settings.

What really needs to be mentioned as well, are the music, the voice acting and the soundscape of the game. These all are very well done, most of the time at least. There is some iffy voice work here and there, but the heavy Scottish accents all around work very well, at least to my ears. The music is all around Celtic influenced and helps the game to find a pretty interesting personality that isn't very often used in games despite the Scottish tropes are quite common in RPGs.

But despite the bugs, I must say, that I really like this new incarnation of the Bard's Tale. It has its own share of issues, some of which technical, some just odd design choices, but as a whole, it is a solid game with a lot to like about it. If inXile ever does get around fixing the most glaring issues in the game, like the odd choice to use save points located in the map instead of free saving (the game is saved automatically when you quit, so there that), it even might become a great game.

As I've stated, this is based on my first 10-hours with the game and as such, considering the timeframe inXile has given with their patches, when I finally get to the end, most of the bugs might be ironed out and maybe even the optimization of the game is better. I'll do an additional write up on that later.

Even now, though, it is a game with charm. And with bard's that just might be all you need. 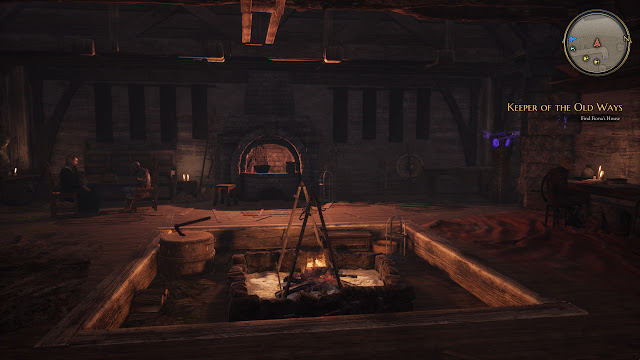