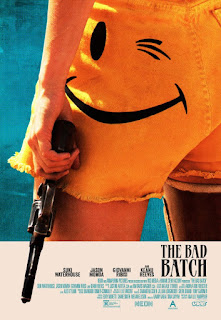 At times it's far too obvious that a movie is just trying too hard. From the getgo, the Bad Batch feels like it's trying so hard to be something greater than it actually is, no matter what. It doesn't try to do it with the script, which is a pretty straightforward B-flick dystopia,  but with imagery and music. It's trying its hardest to create a dreamlike state, where things happen and everything feels odd despite it is set in a world where on the other side there's a group of cannibals, on the other drugs popping ravers, both contained inside of a huge desert prison, where the USA is ferrying its criminals, earmarked Bad Batch.

The story starts when Arlen (Waterhouse) is thrown into the desert prison. Her crime is not specified, so it's anyone's guess what she did on her previous life behind the fence, but this desert is now her new home. After the gate closes, she ventures forth, only to stumble on roaming cannibals, who imprison her and cut off her arm and leg, needing it them for protein, given that most of the cannibals are bodybuilders, the boss cannibal being Miami Man (Momoa)

The legless lass manages to escape her captors after braining in her guard and ends up in Salvation, a habitation of raving ()dance music that is, as otherwise, they're the nice guys around) druggies, lead by the Dream (Reeves).  Then we jump to 5 months later after she has gotten herself a new prosthetic leg, but she's still armless.

In any case, Arlen ends up walking the wastes again, until she stumbles upon a cannibal woman with a kid (Fink). She shoots the woman, who happens to be Miami Man's spouse or something and the kid is his as well. As Arlen is not fully heartless, she takes the kid with her to Salvation, where she ends up to hands of the Dream and his pregnant wife. After a drug-addled haze, Arlen wakes up again from the desert, where Miami Man has found her, after being pointed to the right direction by a mute hermit (Carrey). He wants Arlen to get the kid back to him. During this time it all goes a bit odd, as Arlen falls in love with the man who has in all likely hood eaten her limbs. Aint love grand?

You might recall that I started by saying that this is a movie that is trying far too hard? See, at its core, the Bad Batch is nothing more but a simple exploitation flick, which is mostly filled with scenes of gratuitous sex and violence. And if this was what there would be on offer here, then I'd say the story would be fulfilling its purpose. But Amirpour wasn't aiming at some cheap exploitation flick here. What she was gunning to was some sort of an odd arthouse flick, set in a world of a dystopic exploitation flick, where the most messed up thing that ends happening is the protagonist to get the hots towards a man who ate her limbs. And it all is happening in a state of some sort of a messed up dream.

Atmospherically speaking, and that's what you really should be talking about here, the flick is at times downright mesmerizing. It's not great of a story nor well told one, but the atmosphere of it is really the best part of the whole thing. The way the images and the situations blend in and out, mixed with a pretty decent soundtrack. And that, mixed with a rather sparse amount of dialogue and a surprisingly strong performance from the cast, is the best thing that I can really say about the movie, as otherwise, it doesn't really hold up together, as while it is at times mesmerizing as an idea, it also is downright dull.

It's uncanny how 120 minutes long movie can feel so longwinded, but that's the crux of it as far I can see it. Cut 30 minutes out of it and it might have worked better, I don't know. Or maybe it is the attempts at heavy-handed socio-political commentary the story has going on. Or maybe this is just the kind of a story that had worked better as the schlock it was clearly meant to be. Whatever the reason is, the end result is a mesmerizing, but longwinded.

The Bad Batch ended up being a pretty different kind of a movie I expected it to be. Whit the premises I was looking for a silly, dystopic action/horror thing, but ended up seeing something that felt more like an arthouse project. Shame, really, as visually there's something there, it just is that the frame of it doesn't work.